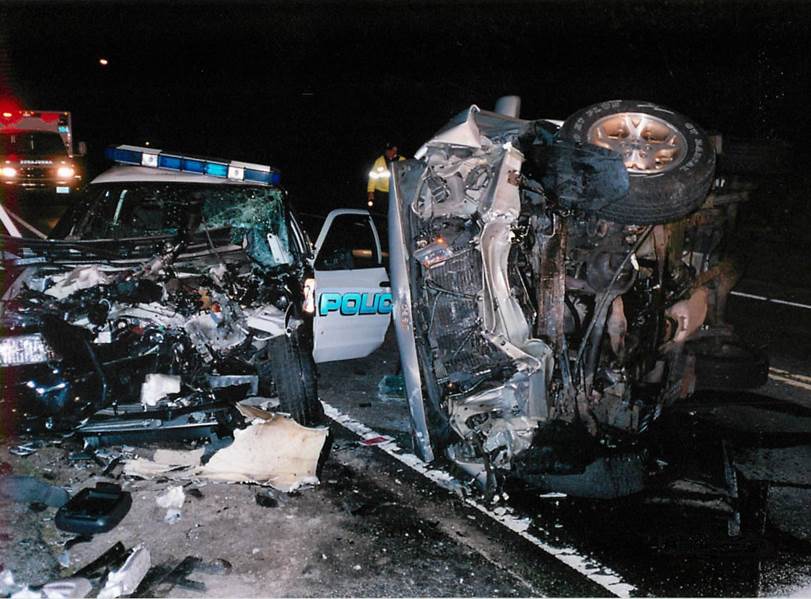 Over the course of five hours, a bar serves one man ten to fifteen beers and three tequila shots before watching the man walk out to his car. Shortly after driving away from the bar around midnight, the man crosses over into oncoming traffic.

A police officer sees headlights drift over the double yellow line and approach his police cruiser on a narrow stretch of road.  He turns the cruiser to the right, but there is not enough time to avoid a front end collision.  The front end of his cruiser is demolished.  The officer’s knees are trapped under the dashboard.  He is extricated from the cruiser by the Jaws of Life.  The drunk driver is taken to the hospital where his blood alcohol level is .24, three times the legal limit.

These cases can be challenging.  Finding witnesses to testify the drunk driver appeared intoxicated when served is difficult, as they are often long gone by the time an attorney reviews the case.  Even identifying the bar can be a problem.  Sometimes the drunk driver is a regular who does not want to involve his local hangout by naming it.

In this case, we learned the drunk driver consumed most of his alcohol at a bar.  The drunk driver testified at his deposition he consumed ten to fifteen beers and three shots of tequila at this bar over four plus hours; however, we had no witness to testify he appeared intoxicated at the bar when last served.

In a dram shop case a plaintiff can prove with circumstantial evidence the defendant patron appeared intoxicated when served his last drinks. We had the excessive consumption from the driver’s testimony.  We also had a toxicologist prepared to testify the driver would have had a .18 blood alcohol level when last served at the bar and that most people are visibly intoxicated at a .15 blood alcohol level.  We then found two witnesses who knew the driver’s drinking habits for many years.  Both testified how the driver always began to show the visible signs of intoxication after just four to five beers.  We now had circumstantial evidence the defendant appeared intoxicated when served his last drinks at this bar.  The injured officer agreed to settle the case against the bar for $475,000 and against the drunk driver for his $20,000 auto policy limit.

Officers should become familiar with Chapter 90, Section 24J of the Massachusetts General Laws.  The statute requires the Court to ask the drunk driver at the plea or sentencing where the drunk driver had their last drink.  It is important to find out where the offending driver drank.  Just as important, assume no eyewitness to the defendant’s drinking may be found, so try and find out early on:  the amount the defendant drank, what they drank, who served them and who they were with.  Finally, contact us quickly so we can investigate the case to gather witnesses and evidence, which may be needed to pursue the drinking establishment.