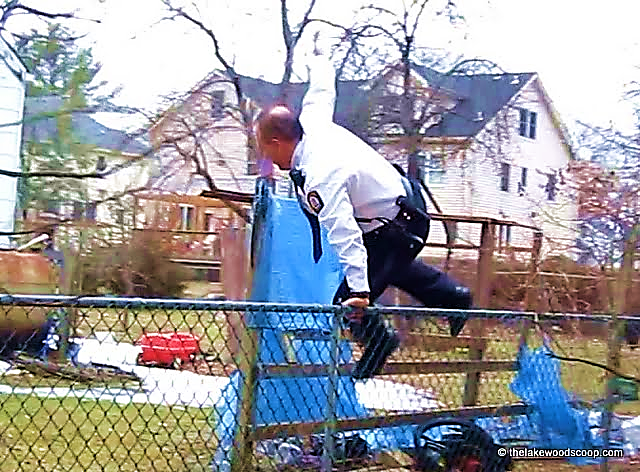 It is after midnight in a rural section of town.  A concerned resident calls 911 to report a commotion and revving engines in a nearby storage yard.  Officers are dispatched to investigate.  Another 911 call comes in.  The resident now reports hearing glass breaking.  Officers arrive at the dark storage yard 100 yards off the main road.  They find the windshields and windows of trucks smashed and broken.  Several subjects are spotted at the end of the storage yard near the woods.  The police identify themselves. They yell “Stop! Police!”  The subjects run into the woods.  The officers run after them through the woods in the dark.  The shift supervisor, Sergeant White, takes up a position across the street on high ground.  He looks for the subjects to come out of the woods and cross the road in his direction.  He hears voices coming from the woods behind him on his side of the street.  He then quietly takes up a position at the edge of the woods.  The voices and sounds of broken branches gets louder.  Sgt. White now hears frenzied voices getting louder.  In the woods approaching him he sees the glow of a cell phone.  Two young men come out of the woods.  They are just feet away from him.  Sgt. White shines his flashlight on them.  Sgt. White gives the familiar order in a loud and commanding voice, “Stop! Police!”  The young men chose to turn around and flee back into the woods.  Sgt. White chases them.  He continues to yell “Stop! Police!”  The young men keep running.  They enter a swampy area heading towards a residential neighborhood at the edge of the woods.  Sgt. White tracks them with another officer.  They hear the young men sloshing through the swamp.  During the pursuit, Sgt. White’s leg slips off of a raised area in the swamp.  His leg drops into the thick muck of the swamp while he is in full stride.  As he pulls his leg out, he badly twists his knee.  He feels something pop inside his knee.  He knows his knee is hurt, but he keeps on.

Sgt. White exits the swamp and woods in the direction he last heard the subjects heading toward.  He hobbles up an incline to a paved road.  He sees below in the woods the glow of a cell phone.  He then tracks the sound of breaking branches and footsteps beneath him in the woods.  The subject who is running is Jeff Runner.  When Runner gets to a clearing near a home, Sgt. White tackles the subject and places him under arrest.  Meanwhile, a K9 unit had been called in.  The K9 tracks and locates another subject, Paul Blade.  Blade made it back to the other side of the street hiding in the woods on the ground.  Blade too is arrested.  Both Runner and Blade are charged with several serious crimes, including breaking and entering into a vehicle in the night time with intent to commit a felony.  They were also charged with malicious destruction of property, disorderly conduct, disturbing the peace, vandalism, and trespass.  Both defendants admitted to sufficient facts, and their cases were continued without a finding and they were placed on probation.

It has long been our position that any person who refuses to submit to a police officer exercising his lawful authority to detain, arrest or place in protective custody and then causes a foot chase, is liable for injuries suffered by the police officer during the foot chase.  As any injured officer can attest, the amount of statutory benefits available to an injured officer does not fairly compensate the officer for all of the harms and losses they suffer, which include pain, suffering, disability, lost overtime and detail wages.  Sgt. White willingly agreed to have his case discussed as an example to other officers who are injured during foot chases, but may hesitate for one reason or another to contact us to discuss their cases.

Although the ordeal for Runner and Blade is over when they receive their CWOF’s, Sgt. White continued to live with his knee injury.  Initially he had surgery to repair a tear in the tendon which holds his knee cap in place.  After a period of therapy he returned to work.  His knee was not all better.  His knee got progressively worse to the point he needed another surgery.  Doctors discover damage done to the cartilage on the underside of his knee cap.  The cartilage is deteriorating from the trauma suffered to the underside of the knee cap in the swamp.  Sgt. White struggles to return to work, but is initially limited to light duty.  Once a stellar athlete, Sgt. White now struggles to go up and down the stairs and often is seen limping.  After returning to full duty, he undergoes a third surgery to his knee.  Again, the surgeon works on the damage to the worsening condition of the back side of his knee cap.  The frustration of not being able to easily run and the anxiety Sgt. White experiences of about whether he can finish his career and be the active father he was used to being, are worse than the daily pain with which he has learned to live.  Most days when he returns home from work, he can do no more than sit on the couch heavily icing his knee from the day’s activities.

As a result of the initial injury and three surgeries on his knee, Sgt. White was out of work almost 16 months.  We made claims against both Runner and Blade for Sgt. White’s harms and losses, which included his diminished earnings, his medical treatment, the medical bills, his diminished quality of life and his pain and suffering.  At first, neither Runner or Blade would accept responsibility for the injury caused Sgt. White.  During litigation, Blade settled with Sgt. White for $62,500.00.  Runner, who was eventually caught by Sgt. White, chose to go to trial.  Runner argued to the jury it was Sgt. White’s fault for his injury.  Runner argued he was just a 17 year old kid and deserved a pass from the jury.  He argued Sgt. White was foolish to chase after him in the dark through a swamp.  We argued Sgt. White didn’t know who he was chasing and that he was doing his job.  Further, Sgt. White didn’t know what Runner and Blade would do next.  They were heading toward homes on the other side of the swamp and woods.  Foremost we argued, a crime had been committed and Sgt. White was doing what he was trained and hired to do:  protect the community by arresting the perpetrators of the crime.  If people in the community are free to not follow a police officer’s lawful orders, there will be chaos.

The jury returned a verdict for Sgt. White.  The jury determined that Runner was 100% responsible.  The jury decided Sgt. White shared no responsibility for his own injury.  Runner was ordered to pay $299,000.00 to Sgt. White.  Adding in the $62,500.00 Sgt. White received from Blade, Sgt. White received total compensation of $361,500.00.  From that amount Sgt. White reimbursed his Town for some of the money it expended for his injury on duty wages and medical expenses.  This was a benefit to the taxpayers of his town.  The persons responsible for the costs involved with his injuries paid for it, rather than the community.

Lessons to take from this case are:

Sgt. White’s knee will continue to get worse as he gets older.  As he looks back at the night his injury occurred, he will take solace knowing the community he is sworn to serve and protect heard him.  A police officer’s job is dangerous enough.  The community will not tolerate needlessly endangering a police officer by engaging them in a foot pursuit. When a person is ordered to stop by the police, the community expects them to stop and obey the orders of a police officer.  When they don’t stop and the officer is hurt, we will work hard to make sure they pay for it.

Consult with us early on, so we can determine whether you have a viable case and to learn what your rights are.  Sometimes we need to do some investigation to determine whether a case is worthwhile to proceed on.  Decisions about whether to proceed with a claim always belong to the injured officer, not us, and can be made later.  When we work on these cases, we work on a contingent fee basis. That means the injured officer pays nothing up front, nor while the case is pending.  He or she only need pay for legal services and expenses at the end of the case, if we successfully collect money on their claim.   We typically will receive one-third of the money collected.   In the off-chance we are unable to collect money for the injured officer, the officer owes nothing for our services.

(In order to protect the privacy of the injured officer and witnesses, all names have been changed.  Any resemblance to names of real persons, past or present, is merely coincidental and not intended.  The injured officer agreed to have this article published in order that police officers around the Commonwealth be better educated about their legal rights to compensation when injured).