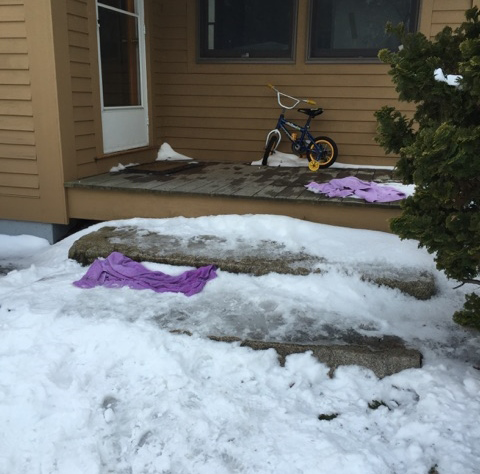 A landlord’s tenant is the subject of a drug investigation by a joint task force.  With three knock and announce narcotic search warrants in hand, the police enter the landlord’s multi-unit rental property through the front entrance without incident.  The police search the tenant’s second floor apartment.  The police find a bag filled with heroin and the tenant is taken into custody.

While leaving the building, a local police detective slips and falls on snow and ice covered granite steps attached to the front porch.  As you may know, it is often more dangerous coming down icy stairs than going up.  The detective suffers a complete rupture of the patella tendon in his left knee.  Less than two weeks later, he had surgery under general anesthesia to repair his knee.  The detective’s condition improved with time and despite some continuing symptoms, he was cleared for a full return to work just over five months after his fall, including a short stint on light duty.

We have been making a habit of stressing the importance of documenting ice falls with photographs right away.  This case was no exception.  Similar to a case we reported on a few months ago, a fellow officer took plenty of photographs to document the condition of the stairs soon after the detective’s fall.  The photos clearly showed the front entrance covered in a thick layer of hard packed snow and ice.  In addition, the photos indicated an absence of any gutter system to direct melt water away from the roof above.  The absence of gutters allowed melt-water to drip down and refreeze to form melt water ice on the front entrance.

The photographs were critical in enabling us to settle the detective’s case with the defendant’s landlord for $150,000 without having to file a lawsuit.  Had we needed to involve the Court, the photographs would have been a crucial part of the case.

Aside from the importance of photographs, here is the takeaway for public safety officers around the state – landowners must keep their property safe for visitors where people are expected to walk.  Moreover, this holds true regardless of why you are legally at a property.  Whether it be responding to a domestic call, serving a search warrant, or anything in between, it does not change the fact that you are a lawful visitor and the landowner has a continuing obligation to make it safe for you to walk on the property.

That said, Massachusetts law is reasonable.  It recognizes we live in New England.  There is no expectation that every speck of snow and ice be removed from someone’s property.  The law does, however, impose a duty on landowners to use reasonable care in all circumstances.  Typically, this involves shoveling after a storm or putting down sand or rock salt on icy areas.  This photograph tells another story: the landowner chose to neglect the buildup of snow and ice, endangering all visitors to the property, including emergency responders.

To protect the privacy of the detective and witnesses, all names have been changed.  Any resemblance to names of real persons, past or present, is merely coincidental and not intended.

The injured detective agreed to have this article published in order that public safety officers around the Commonwealth be better educated about their legal rights to compensation when injured.